Written and directed by Gregory Widen
Author of the original Highlander and Backdraft.

Certainly "The Prophecy" is one of the films I'm most proud to be associated with. It was a fresh, wholly original concept and has developed a strong, and well deserved cult following since its original release. It has also spawned two sequels to date. I was one of two DP's on the original as well as DP of the second film, "The Prophecy II.". Sadly, for me, I worked only very briefly (one day of second unit) on the third, but at least it was cool to keep a connection with it. :-)

I should point out and give due credit to Director of Photography Bruce Douglas Johnson, the original DP on the project. I came in and took over when circumstances prevented him from completing the film. Our work is intercut throughout the movie, but for those who really want to know, I did all of the Los Angles based material (most of the first 20 minutes of the film) while Bruce did most of the shooting in Superior, Arizona (the large chunk in the middle). When the film moves up to the Reservation ("Old Woman Butte") that's back to my stuff, intercut with his stuff, through to the end. Honestly, even he and I aren't sure which of us shot some shots and we are (so far as I know) both okay with it. He returned to do the final color timing on the theatrical release prints while I was shooting another project in Texas, and then I returned to supervise the telecine process (the transfer of the film to a video master for all TV releases purposes), which Bruce also sat in on. 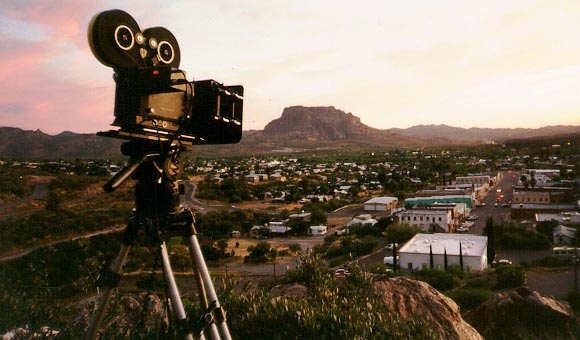 The time lapse camera points down at Superior, Arizona. I clicked this picture
myself as we were photographing the time lapse sunset sequence that appears
briefly in the middle of the film.