This is one of the most exceptional films I've worked on.  Titled Russian Nights at the time we were working on it, Meanwhile in Santa Monica is a seldom seen, 35mm short film, shot with Panavision equipment and containing an exceptional cast.  Director David Gamburg was a Russian theater director who immigrated to the US.  He worked as Robin William's dialog coach on "Moscow on the Hudson" and the two continued their professional relationship afterward.  Encouraging him to make a film of his own Robin Williams did a fund raiser for him to finance this project as a sample of his work.

The Story:    A family of Russian emigrants run a small restaurant called Russian Nights in Santa Monica, California which makes most of its money one night a week when all the local Russians come down to party.  Richard Kind is Alex, the gambling, drinking, womanizing scoundrel who runs the restaurant with his less than understanding, pregnant, American wife, Sally (Ruth DeSosa).  They are desperate for money.  It is no secret to anyone, however, that Alex openly lusts for beautiful Elena (Rene Russo) newly arrived in America under  his sponsorship as her "employer."  She is now a waitress at their restaurant and Alex is forever coming on to her.  She, however, only has eyes for Grishka (Fran Montano) Alex's saint of a brother.  Grishka is the total opposite of him in every way.  An honest, decent and caring man, Grishka will NEVER lie or take advantage of anyone. 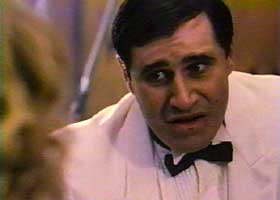 Alex sets up a deal with crocked landlord Irwin (Christopher Carroll) to open a set of clinics serving the immigrant community.  Problem is, Alex has lied to everyone, including his wife and Irwin, in telling them Grishka is actually a doctor (he isn't, he's a photographer).  Now for them all to survive it is up to saint Grishka to lie, passing himself off as a doctor in order to save the family, keep the restaurant and prevent Elena from being sent back to Russia.

At over 50 minutes long the film was shown around as a prospective pilot for a series which, sadly, never sold.  The film has been very seldom seen since.  I loved working on this movie, especially with the wonderful and talented cast and director.  I must give an especially strong thanks to producer Vic Bulluck, who got me involved in the project.  As Director of Photography I really enjoyed the way this film offered me great opportunities for comedy, romance and beauty lighting.